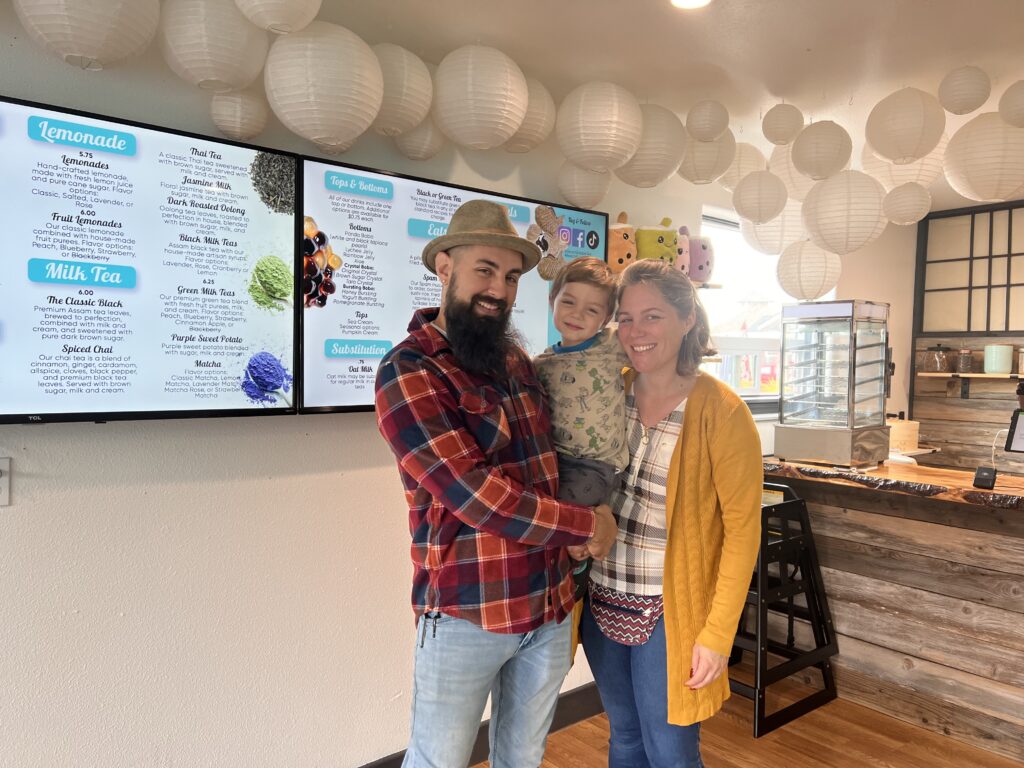 Robert Vasquez is a jack of all trades. He’s worked in graphics design, Hollywood stage design, videography, and even the yarn industry. In fact, it was a yarn shop where he met his wife Diana. The two have since run a variety of businesses together, and in 2021 they opened BEACH BUBBLE TEA, an artisan boba tea shop in Long Beach.

The most notable creation at Robert and Diana’s shop is, of course, bubble tea. Also known as boba, bubble tea is a Taiwanese brew characterized by the “bubbles” at the bottom–balls of tapioca, jellies, aloe, etc. Many recipes have been developed in-house, with many more in the works.

The two are also passionate about hospitality, putting as much care into their customers as they do their home-brewed tea.

“We’re literally a Mom-and-Pop shop,” Robert says, describing the family atmosphere, and how his three boys–Luca, Toby, and Hugo–play in the kitchen and help around the shop. “It’s another home here.”

We asked Robert to tell us more about his experience as a business owner, and how he and Dianna came to make bubble tea on the beach. Here’s what he shared with us:

Why did you choose to start a business in Pacific County?

My wife and I both knew we wanted to get out of California years before we’d even met each other, and we eventually had it narrowed down to Long Beach and Vancouver, WA. Ultimately, it was our oldest son who decided: We asked where he wanted to go, and he chose the empty lot we’d looked at on the peninsula.

It was a crazy decision, but there’s so much to love about being here. And there’s a lot of opportunity; We’d wanted a smaller community where we could start a business, with less competition and costs than a city.

But ultimately it was COVID that launched us into business: We hadn’t planned on being here for another five years or so, and then everything went remote and gave us an opportunity to move. Once everything began to open again, we had to either find new work or jump on one of our many business ideas.

What made you choose your industry?

My wife and I have opened businesses together in the past, and we’ve wanted to do another. And opening a boba tea shop has always appealed to us.

Boba is a Taiwanese style of tea. Half the time we’re educating people on it because people often expect English-style tea. Everyone else coming in are already huge fans of it, like us.

We used to get boba two or three times a day, so we’ve gotten a feel for what we like, what we don’t like, and what makes the difference. Now, years later, we’ve taken all those conversations and put them into practice. And we’ve worked really hard to give people a fantastic product.

Even with a great product, though, our biggest commodity is hospitality. We’ve poured a lot into teaching people how to approach customers, how to walk them through the menu–especially if they’re unfamiliar with the product–and create conversation.

And we have a nice, clean atmosphere–the kind of place where people want to hang out.

What has been your most satisfying moment in business?

Our first Fourth of July.

Earlier that summer, there was a parade in Long Beach that I had no idea about. Somebody came into the shop and said, “Hey, are you guys ready for the parade?”

We tried to get everything lined up, but when the time came it was crazy. It was our first giant rush.

Our wait time crept up to 30 minutes, then up to an hour. Which is just insane. We were thinking, “This isn’t even the Fourth of July!” Which is notorious for being one of the busiest weekends here.

There was a lot that we needed to readdress–like our wait times. Part of the issue was our staff was still new. So we needed to lower the learning curve and the margin for error, simplifying the process as much as possible. The more complex we make things, the greater likelihood of something going wrong.

By the time we got to the Fourth of July, we didn’t have anything over 15 minutes for an order, which was fantastic. That felt like a huge win.

What is unique about your business?

We advertise as “artisan” bubble tea because we make everything for the drinks in-house. With the exception of the tapioca pearls. The pearls are very labor-intensive, but one day we’d like to make those too.

There are a number of things we don’t do drink-wise that other shops offer because those other shops use powder. They don’t even have much tea in it: they take a scoop of powder, add water, and shake it up. Those tend to be ultra-sweet, and not that great. So we brew all our teas fresh.

At home, we’ve vetted hundreds of teas to find the right flavor palettes. We found it hard to control the flavor without increasing the sugar level, so we started making our own syrups.

Then we couldn’t get the creaminess right, so we started making our own creamer.

It’s taken a lot of careful planning, but we’ve worked out a lot of the details. Through our experiments, we’ve been able to add many different drinks. And we’re playing around with a lot of ideas, like cherry blossom crystal boba, chili pepper lemonade, and the much-requested coffee boba.

If you had a piece of advice to offer someone starting a business in Pacific County, what would it be?

There’s an African proverb: Little by little makes a bunch. So pay attention to detail; Take something and make sure it’s good before putting it in your pile. Spend your time being meticulous about things, then you’ll have a level of certainty in what you’re doing.

A lot of people try to do too much. We originally had a huge menu; There was so much we wanted to do! But it wasn’t the time yet.

I’ve also seen people hire a half dozen employees before opening day, with no idea of what their numbers are going to look like. So we took on all the work ourselves, which was a hustle–and challenging while raising a family–but I’m glad we did that.

We’ve since spent time assembling our team, and we’re really happy with the group we’ve gotten.

But keep it simple. Take the time to plant and grow.

For any aspiring business owner in Pacific County, here are a few key takeaways from Robert’s experience: