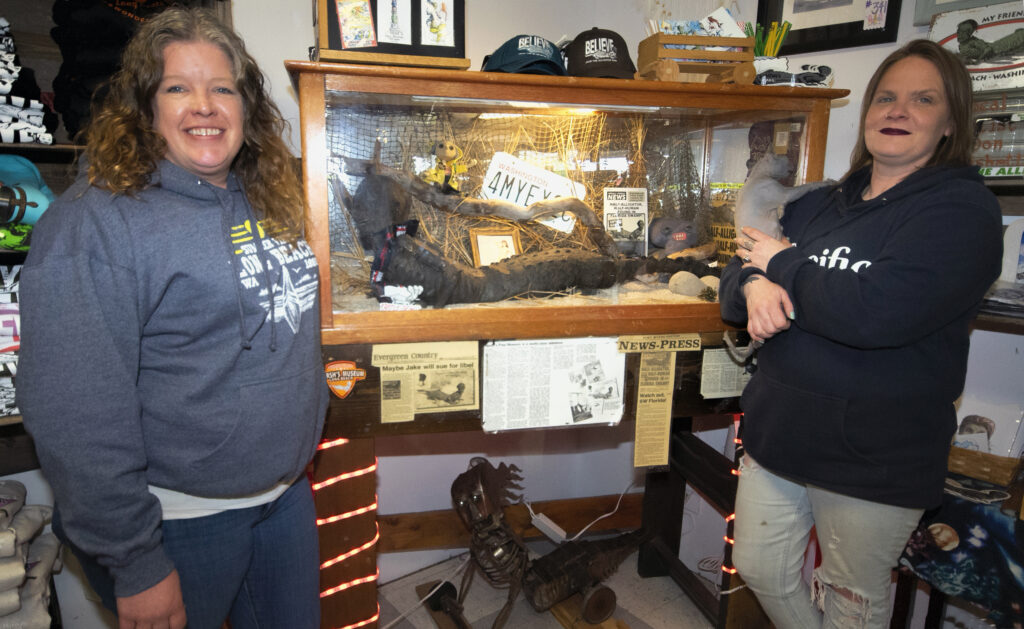 How a family business stood the test of time with a handful of oddities and a good amount of gumption.

Marsh’s Free Museum is a Long Beach legacy. Any trip to the peninsula would be incomplete without visiting Jake the Alligator Man, playing vintage arcade games, and being serenaded by boxed musicians. Then buying pristine seashells and saltwater taffy, if you feel so inclined. It’s been a tourist’s tradition for nearly a century.

Still, how did Marsh’s stand the test of time, generation after generation?

Mandy Marsh grew up working in her family’s shop. She moved to Arizona for a time, until her uncle–who had been running the museum–passed away. Mandy moved back to Pacific County, and she and her cousin, Shannon Ahern, took ownership of the museum.

We asked Mandy to tell us about their experience:

Why did your family choose to start a business in Pacific County?

My great-grandpa started it in the 1930s. He had an ice cream parlor out at Grays River and a restaurant where they’d started a collection. Then he started the museum in Long Beach. He passed away in 1978. But shortly before that, in 1972, my grandparents built the store across the street. I think we’re the longest-running family-owned business in Long Beach. That’s cool cause a lot of people come in and don’t realize it’s the same family. I plan on making my kids work there. Someone has to keep it going! And how could you not have it in Long Beach? People will say, “My grandparents used to bring me here.” And then they’re bringing their kids or their grandkids. That’s pretty cool to see.

What was your mission?

To bring back the old-time feel. I overhear people say that it’s a gift shop and I’ll be like, ‘OK, let me show you around, so you don’t have that impression.’ I make people go on the Throne of Love, and then there are seven or eight things that are mandatory to see. We’re restoring a lot of the games. Like we have a Williams baseball game out right now, a 1920s arcade game. It’s been almost a year now getting the whole thing restored.  People come in all the time, and they’re so sad that it’s not there. But it’ll be back soon!

How do you define success?

My cousin and I had a goal for the first couple of years and exceeded that goal. I would consider that success. And having people come in, then seeing their comments on Google or Yelp. It’s pretty cool. A lot of people come in not even knowing what to expect. I hear people say they’re so overwhelmed. It’s funny, cause for me it’s normal. I went to an oddities place in Portland with my son, and they have this freak show there. I was like, “We have five out of the nine things at our store–and this is what they call a freak show!”

What has been your most satisfying moment in business?

How do you view your role in the community?

My grandpa did a lot for the town. He started the Long Beach merchants, and he was also on City Council. And my great-grandpa did the clam festival. He cooked in the big frying pan. He was one of the first to start that. We’re still kind of new, and there’s a lot of stuff going on–especially with COVID. But I volunteer for every festival.

If you had one piece of advice to offer someone starting a business in Pacific County, what would it be?

Meet your local business people. Cause everyone’s willing to help, however they can. So don’t be afraid to stop in, say hi, and meet the people around you.

Final Thoughts Thinking about starting a business in Pacific County? Here are some of Mandy’s tips for a successful business:

● Stay true to the vision of the business

● Make a goal and make it happen

● Connect with your fellow business owners

● Embrace the strange; You never know who will appreciate it