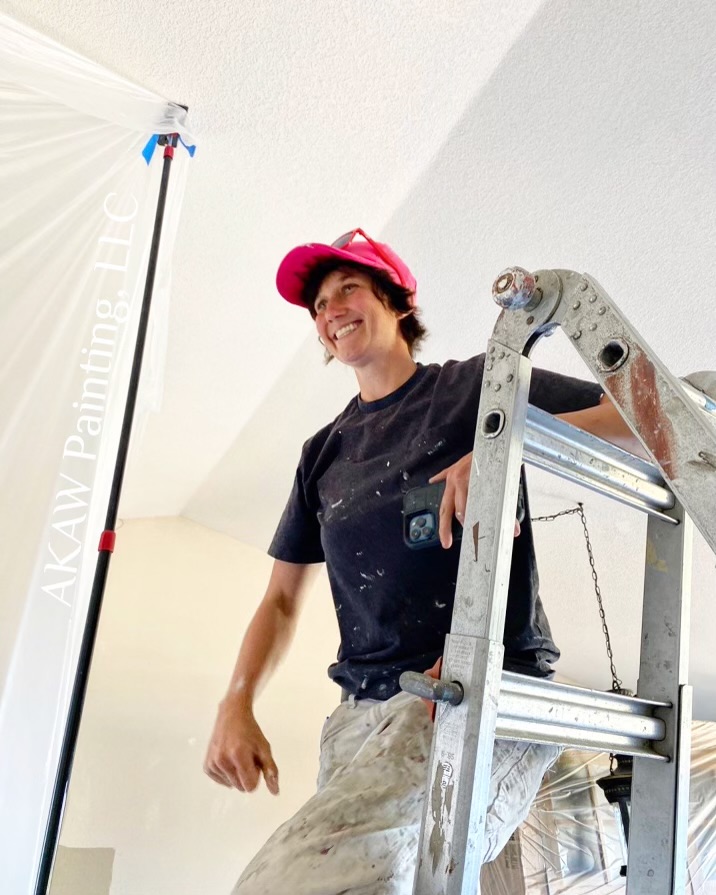 The first thing Natasha Beals ever painted was a doghouse. Since then she has expanded her portfolio, traveled the world with her trade, and started a business painting homes around Pacific County–for people, not just dogs.

Natasha started AKAW Painting in 2020 as an alternative to the hospitality industry, where she’d worked before the mass lay-offs began. She started out solo, but two years later Natasha has a full-time crew and operates as a general contractor, offering landscaping, chimney sweeping, gutter cleaning… the list goes on. Still, painting is the AKAW specialty–as is the infectious enthusiasm that Natasha and her crew bring to the job site.

Natasha tells us more about her story and how she got her start:

Why did you choose to start a business in Pacific County?

I’m originally from Washington state: Born in Spokane, grew up in Bremerton. When I graduated college, I left and traveled the world, working everywhere I went. My wife is from Louisiana and we met in Yellowstone. We traveled together for a while, then when it came time to settle down, we decided just to try something.

Originally we thought Oregon would be cool, but then we saw an old photo of this boy in Ilwaco–holding a fish as big as he was–and I said, “I want to go there. That looks cool. That town looks like it has 50 people in it.”

So we loaded everything up, came to Ilwaco, and got some entry-level positions–because that’s what we do to see if it’s somewhere we’d like to stay.

I started the business in 2020. The pandemic was kind of what got me started because I got laid off from the hotel where I’d been working. I started asking friends and people in the community if they needed any side work done. And word got out.

Once the word gets out for any contractor–and you communicate well, you show up, and you do good quality work–you’ll get slammed. And you’ll have so much work on this peninsula because the community will come together and get the word out before you can even get your EIN number in line. So it was good!

It was also a little nerve-wracking because here we have a society that’s saying it’s all coming to an end. And here I’m going, “I’m gonna go start a business. What the heck?” We didn’t know what would happen. But I think maybe it also gave me that push to get going.

We never know what’s going to happen. So what do you have to lose? Just go for it.

How did you come up with the name of your business?

AKAW is a surfing word meaning “awesome.” When you’re out surfing something cool, you just say, “That was AKAW!”

I’d googled all sorts of different beachy names, since we’re in a beach town. But then I wanted the name to be more personal, and I like surfing. That’s how I got it.

I also love crows and ravens. So I chose it for the bird as well, for our logo. And then spelled backward it’s like Pacman: “Waka, waka, waka.” They’re just so many ways to play with it! So I had to do it.

It’s also great for finding someone in a grocery store.

What made you choose your industry?

My aunt, actually. In the summertime, my mom would send me off to live with my aunt and my grandma. I had a lot of energy and my aunt was a painter, so when I was 14 I started going with her to job sites.

She would just have me spot the ladder at first. But all summer long I’d help her paint.

Throughout college, I’d paint on the side to make money. Then, while I was traveling, I’d go door-to-door and say, “Hey, I’ll paint your house if I can crash in your guest room or put up a tent somewhere.” People would agree and buy the materials and I’d stay with them while I worked on their house.

So I got to see the world with this trade. And it’s just followed me everywhere I’ve gone.

I tell my guys, “You probably didn’t grow up wanting to be a painter, but you won’t ever be without a job.” Painting is something you can always fall back on because it’s a skill people need.

What has been your most satisfying moment in business

It’s rewarding in general because you’re making someone’s house fresh and new, and their excitement is awesome.

And this peninsula is phenomenal, so every single project has had its satisfying moments. The big homes are fun because you’ll get three stairways and an elevator and the guys really enjoy that. And the views are cool.

Also, people are starting to branch out, so we’re getting some cool colors.

We had a condo where they wanted bright oranges and yellows, so you could not go to work and be upset that day. Walking in you had the ocean view, then you’d open a paint can of this wild crazy orange. That was satisfying.

What is unique about your business?

I think we stand out because of our young mentality. We like to have fun!

We’ve had a lot of clients come in like, “What’s happening?” Cause we’ll be in their living room joking and laughing.

And we have a party fund, so we’ll go fishing or snowboarding or something like that once a year.

We also incorporate community as much as we can. We don’t have a hierarchy where I’m the boss and everyone else is below me; We’re all pretty equal.

Some clients clearly know what the scope of work will look like. But other clients say, “You’re the professional, give us your input.” And I’ll go back to the crew and ask what they think, then they get to be involved as well. And that’s their name on it.\

And once an employee has been with the company for a year, AKAW will offer to send them to the community college for the automotive or welding program. That goes hand-in-hand with the construction that we do because yeah, we’re painters, but we do a lot more. We’re actually a general construction company so we can do everything. And if we can’t do it, we’ll sub it out.

I guess what makes us stand out is that we’re young, eager, and maybe a little too crazy out there at times.

If you had a piece of advice to offer someone starting a business in Pacific County, what would it be?

I say this often: Nike it, just do it. Keep it simple.

I said, “It’s gonna take forever, plus it can be expensive.” So I took a permanent marker and wrote “AKAW” on it. I said, “It’s ghetto cool, run with it. Sell it.”

The biggest thing is to get up and just do it because everyone’s a critic. Then your head alone has millions of excuses every single day. It’s so easy to run away from it. It’s so easy to say, “I’m not going to do this, or I gotta have this, this, and this to even do that.” Screw it. Just do it.

If you fail, well, you don’t want that… But it means you’re one step closer to succeeding than the next guy who didn’t even try.

For any aspiring business owner in Pacific County, here are a few key takeaways from Natasha’s experience: